Pani Popo was one of the very first bread recipes that I tried back in 2016. I was new to baking yeast breads at that time, and this Samoan sweet bread seemed the perfect introduction to bread making. I can’t recall how exactly I stumbled across this bread but it was a blessed moment when I did.

What is Pani Popo? 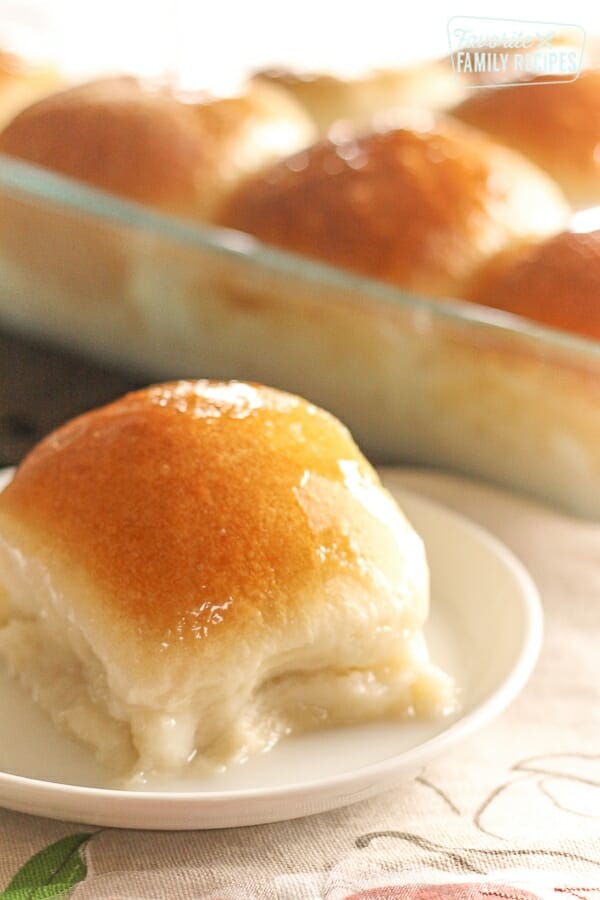 “Pani” equates to buns and “Popo” neatly translates to coconuts in the Samoan language. Et voilà ! Coconut buns! Am I mixing my languages here?

To be perfectly truthful, its name has always struck me as a little bit funny and reminded me of the Dragon Ball character, Mr. Popo. I’m pretty sure Mr. Popo would love to have some of these.

So it’s by no means a long stretch to assume that somehow coconuts are involved in this recipe. Well, I can confirm that coconuts are indeed involved and in such a starring role too!

You see, what separates the Pani Popo from the rest of the sweet bread buns is the addition of the sugary coconut sauce to the buns just before (and possibly even after) baking.

The sauce is a thickened mixture of coconut milk (or cream) and sugar. It’s poured over the dough balls after the second rising. It’s basically drenched in the sauce and then baked for 20 minutes or so. It smells as good as it tastes.

Once the bread is taken out of the oven, what else is there to do but pour another helping of coconut sauce over the freshly baked buns? I made an extra helping of the sauce just for this purpose. 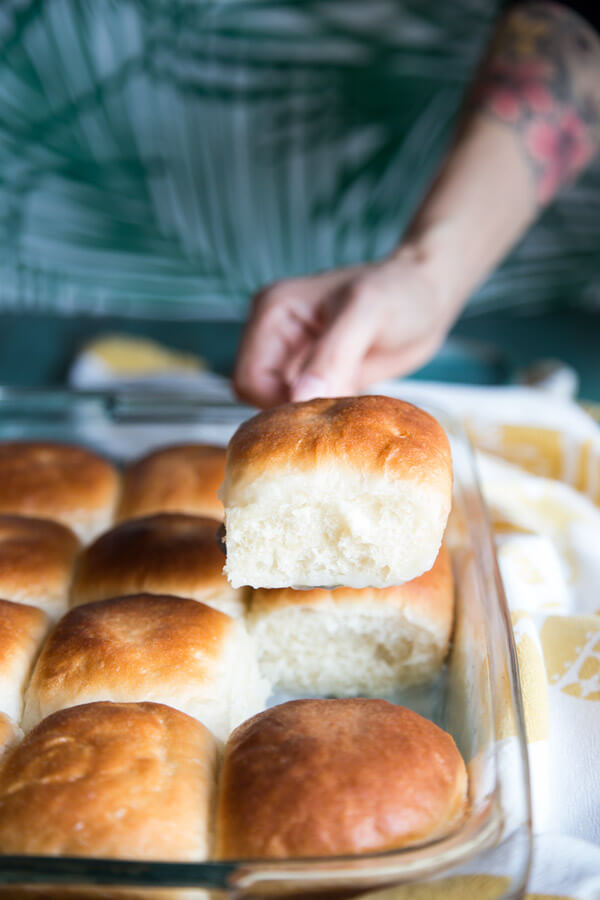 I used my trusty base recipe for breads (the one I use for my super soft pandesal recipe) but with a few changes. First, I cut the amount of milk by a fourth – I didn’t want a sticky dough this time. But don’t worry, it doesn’t affect the taste at all. Second, I substituted coconut milk for some of the milk. Hey, Pani Popo literally means coconut buns and it would be remiss of me not to. It’s not overpowering the bread by the way, but it adds a little more dimension to the taste.

As I mentioned earlier, I made an extra batch of sauce to pour over the Pani Popo. This is entirely optional; you can use half of the sauce before baking and reserve the other half for serving. Oh, and if you’re using coconut cream instead of coconut milk, you’d might want to use a a little bit less cornstarch. 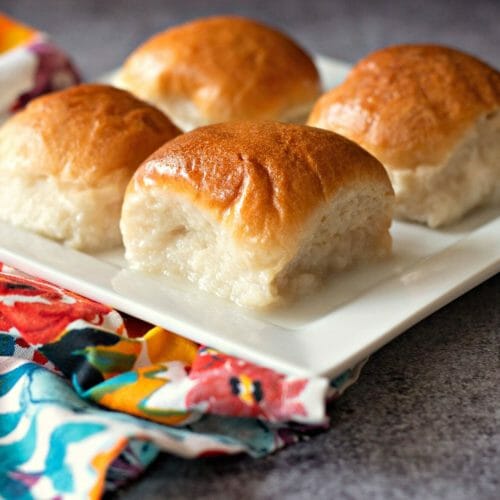 For the Coconut Sauce:

You can reserve half of the sauce to use as topping for the baked bread.
If you don’t like coconut milk in the dough, use normal milk instead.
If you are using active dry yeast instead of instant yeast, heat up the milk until lukewarm and dissolve a tablespoon of sugar in it. Add the dry yeast and let it bloom for about 10minutes. Add to the dry ingredients.
Add more milk by the tablespoon if the dough seems to dry.
You can put a bit of foil on top of the bread while it bakes if it gets brown too fast.
Keyword bread, bread rolls

Pani Popo Recipe – How to Make a Vegan Pani Popo 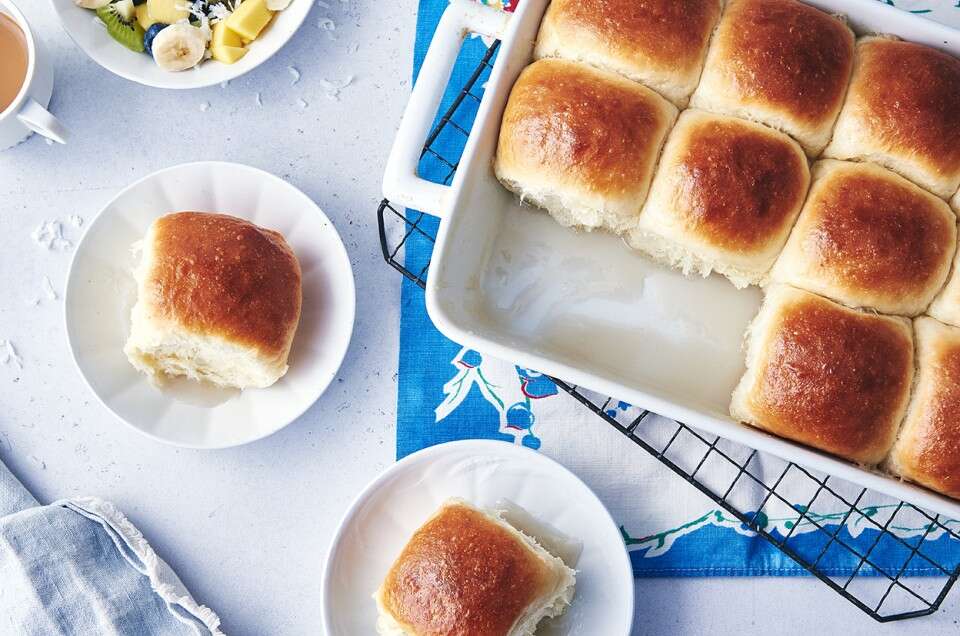 If you’re looking for a pani popo recipe that’s a little bit different, you’re in luck. There are several variations of the Samoan sweet coconut bun, and one vegan version. Listed below are some tips to make the most delicious pani popo possible. To make pani popo vegan, skip the sugar and make the sauce using coconut milk instead. You’ll also need to prepare the coconut sauce beforehand.

The best way to enjoy Samoan sweet coconut buns is right from the oven. Once the rolls have cooled completely, store them in an airtight container, away from direct sunlight or heat. You don’t want to let them sit out in the open, as the steam will make them soggy and mold faster. They’re best kept in a breadbox or a cabinet. Never put them on the top of the refrigerator, since it is too warm.

A popular Samoan sweet coconut bun is the Pani Popo, a soft bread roll baked in a sticky coconut sauce. These sweet rolls are perfect for breakfast or dinner, and are also delicious with glazed ham and tropical fruits. Pani Popo is a traditional Samoan delicacy, and is baked upside down to retain its fluffy texture. The coconut sauce makes the underside of the bread sticky.

If you’ve ever dreamed of eating a coconut-scented brioche, you should try making a vegan Pani Popo recipe. It’s as delicious as it sounds and will put you in a good mood while you eat it. It’s easy to make, too. Here’s how! You’ll have vegan pani popo in no time! This recipe is perfect for a special occasion or as a quick snack on your next beach holiday.

Vegan Pani Popo recipe: This delicious Samoan dessert is made from yeast bread and coconut milk. The coconut milk gives it a sweet, glazed finish that many people find delicious. You can make this vegan pani popo recipe using coconut milk or soy milk instead of eggs. These are easy to modify and will taste great! You can even use your own coconut milk or almond milk if you prefer. It’s so delicious, you’ll wonder why you never tried one before.

Coconut is an important part of Samoan cooking, and the coconut sauce in this Samoan sweet bread recipe is no exception. The Samoan word “popo” literally means coconut, and “pani” refers to bread. The bread is usually served upside down, topped with a sweet coconut sauce. It’s also great with coffee, as it pairs well with coconut milk. Here are some basic steps for making a coconut sauce for pani popo:

Start by thawing the dough. This will allow the coconut flavor to penetrate the dough and the roll itself will rise. Next, add the remaining flour and mix on low speed until the dough is moderately stiff. Then, arrange the dough in rows. You can drizzle the coconut sauce over the rolls as they bake, or serve it on the side. The coconut sauce will add the finishing touch to the Pani Popo.

If you are a fan of Filipino sweet dishes, you will love the ingredients for pani popo. These Filipino rolls can be made from frozen dough that is then thawed and risen. This allows the coconut flavor to be infused into the dough. Once the dough is thawed, the next step is to preheat the oven to 150°F and arrange the dough in rows. Once the dough is ready, it can be baked for approximately 30 minutes, or until the tops are golden.

To make Pani Popo, all you need are the ingredients listed below. The bread is made from yeast and sweetened coconut milk. It is traditionally baked until golden brown and can be enjoyed for breakfast or dinner. You can also serve it with glazed ham and tropical fruits. It makes a delicious and unique bread side dish and goes well with any meal. However, if you’re looking for a dairy or gluten-free version of this traditional Samoan dessert, you can always replace the coconut with a dairy-free or gluten-free substitute.

Pani Popo is an iconic Samoan sweet roll made from yeast bread and coconut milk. Many people find that the taste is reminiscent of glazed donuts. Although this traditional dish is not gluten-free or dairy-free, it can easily be adapted to fit dietary restrictions. Here are some tips for making Pani Popo. You can also prepare this traditional sweet treat in different ways. You can serve it upturned or rolled like a cinnamon bun.

When cooking Pani Popo, the dough must be thawed and allowed to rise, as the coconut flavor can soak into the dough. After that, you can arrange the dough in rows and place them in a preheated oven. While baking, the pani popo is best eaten warm. To prepare it, you must also pre-heat the oven to 150 degrees Fahrenheit. Then, you can bake the rolls. 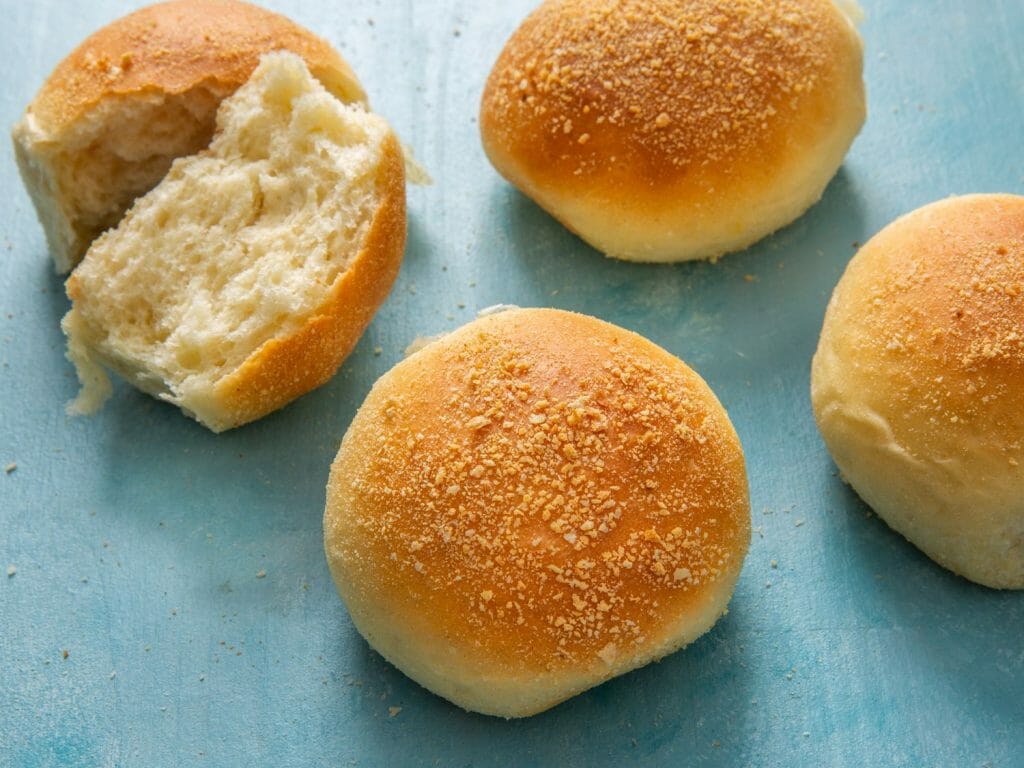 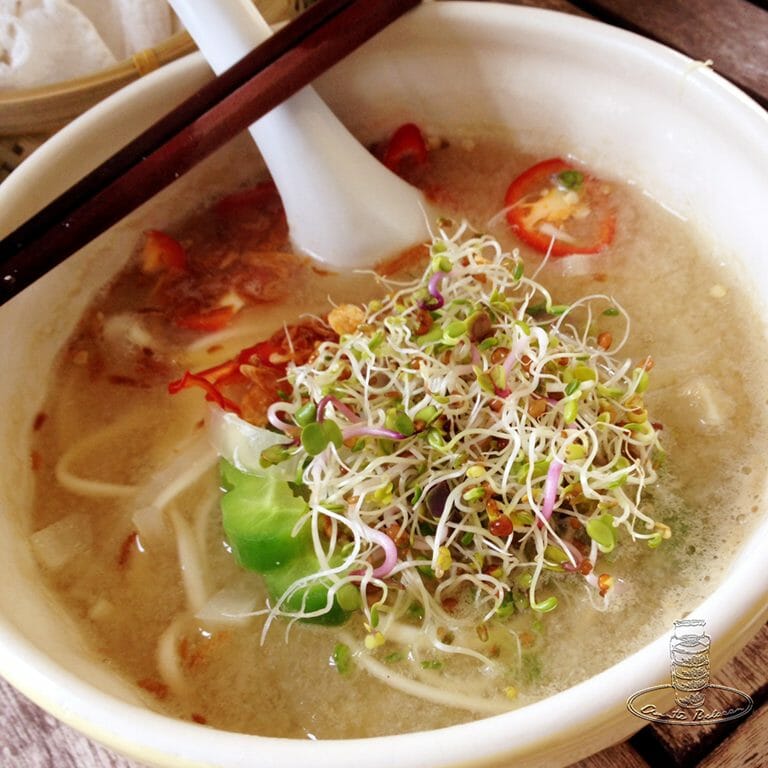 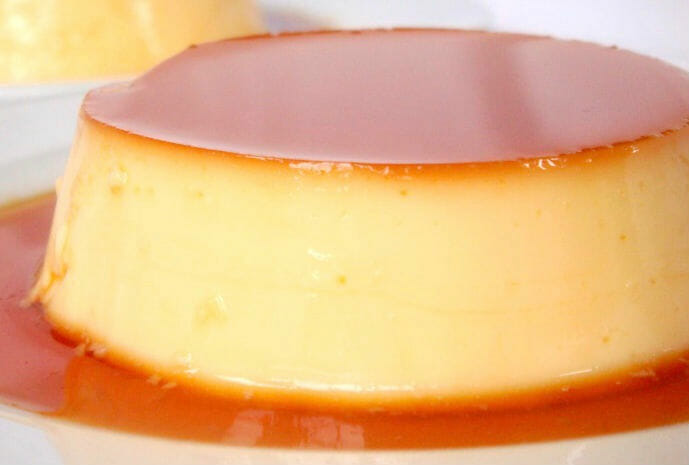 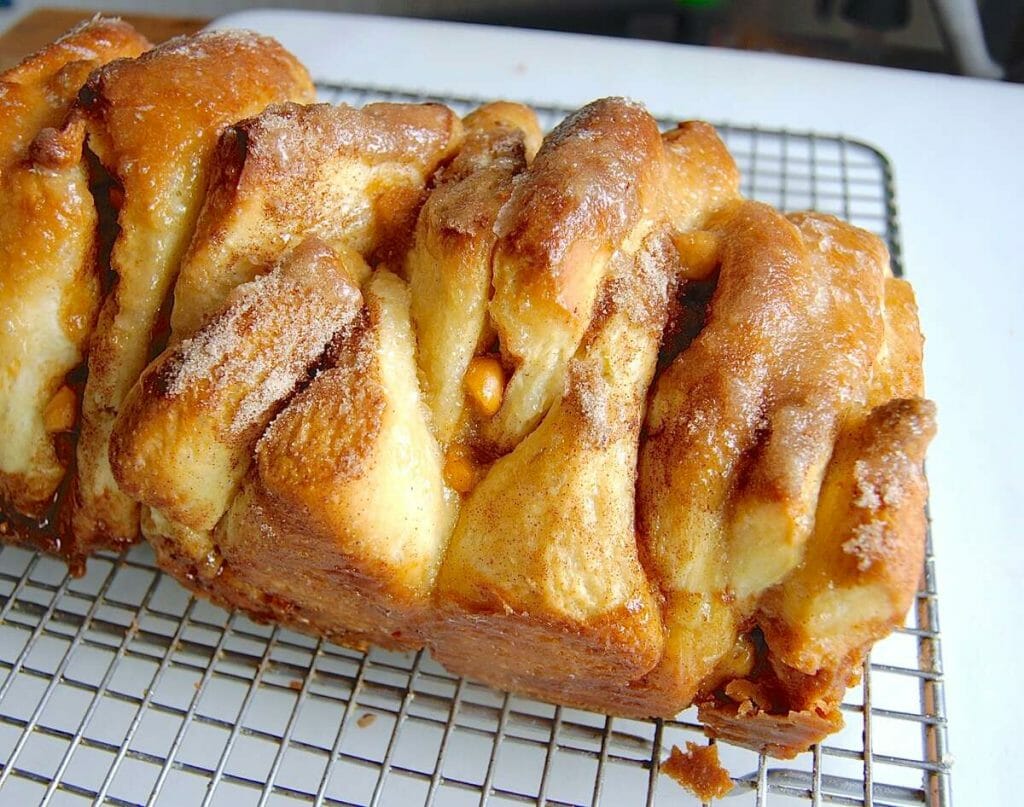